Boundaries: The space between “Me” and “YOU”

This is a simple way in which I interpret Boundaries. As a psychologist in clinical practice, boundaries happens to be one of the most discussed, yet feared, topics. It’s confusing and weird. It’s a little complicated to grasp and put into practice for most people. We are social beings who love to be with others. We seek out connections and desire to be desired. Being an “us” makes life a little more enjoyable. We live for someone else’s happiness, and taking care of others gives us fulfillment.

But, what happens when our spouse of xx number of years no longer fulfills our needs, arguments are more often and more intense, sadness and loneliness take over, and the dreaded “D” word, yes… you can say it… Divorce seem imminent. All of these issues you experienced inside of your marriage don’t just go away because a piece of paper says it should.

After working with men and women going through divorce, it is clear that the dynamics that were there inside of the marriage will most likely continue after the marriage dissolves, particularly when kids are involved. Add to the already huge pile of negativity a few more resentments towards your ex because moving on with life wasn’t as easy as you’d hoped because you have to continue to have a relationship for the sake of the kids.

We can’t change others. It’s a dirty fact that we don’t want to accept. The key to successfully divorcing with kids is healthy Boundaries. It’s time to cut the emotional ties that didn’t work and begin to build new boundaries that, at the very least, will work for you and your kids. If healthy boundaries weren’t already there to help maintain your marriage, now would be a great time to learn how to apply this concept to your “new” life. This is not only important for your kids, but also extremely imperative for you to move on and begin to experience life in a new way with your ex.

It’s not going to be easy, since many of the same dynamics that drove you two apart in the first place will remain. Be prepared for a variety of emotions to arise when applying new boundaries to an old relationship such as guilt, shame, fear, anger, sadness, and/or even excitement. Here are a few steps towards reaching healthier boundaries after divorce:

Step 1: Acceptance – in order for anything new to being, you must first accept life and reality as it is now, here, today. You are now on the path towards establishing a new normal.

Step 2: Support – find your support system. Family, friends, or a support group for divorced men/women. Reach out and ask for help. It takes courage to seek help.

Step 3: Understand yourself – write down what worked for you and your ex (yes, there was something that worked otherwise you wouldn’t have been with him/her for that long) and what didn’t. Build on the strengths and lessen the focus on the negatives. Try to get as detailed as possible. For example, “We did really well communicating about schedules through text, but could not talk over the phone without an argument.”

Step 4: Establish new rules – once you know what did work, embrace those systems. Eliminate the dynamics that did not work as much as possible. For example, “We fight too much when we try to speak, so for now, we are going to only communicate using this app for divorced parents until we can find alternative ways to communicate respectfully.” Or, “I will only respond to his/her text/calls/emails between the hours of 5-7pm after work.”

Step 5: Don’t involve kids – the biggest mistake is putting kids in the middle. “He said – She said” statements to your kids about your ex is one of the most difficult things kids have to deal with in a newly divorced family. After working with countless kids/teens whose parents went through divorce, this unhealthy dynamic that parents (mostly unconsciously) get into is the number one most destructive thing they can do that adds undo stress to the kids’ well-being. Kids will typically protect both parents (unless one did something bad, like cheat, on the other in which kids tend to side with the parent who was hurt) – when they are with mom, they will side with her and talk bad about dad; when they are with dad they will side with him and talk bad about mom. This can increase a child’s sense of guilt, confusion, anxiety, and/or depression. Kids aren’t yet capable of handling adult emotions, and they should not have to choose between parents, no matter who did what.

Step 6: You are not married anymore and he/she is not your responsibility. Breaking those emotional ties can be the most challenging. Your ex knows just what to say to trigger your sadness/insecurities. Seek out a good counselor to help you become more aware of your own triggers so that your ex’s comments won’t get through to the core of you as much. This is typically an ongoing process; time, self-esteem and confidence will help this step become easier over time.

Learning any new relationship skill takes time, practice and a good amount of ups and downs. Give yourself some slack; you’ve already gone through so much. This adventure, although not one that you asked for perhaps, can be viewed as a positive challenge of emotional, spiritual and even physical growth. Model for your kids how to respect someone else inside of conflict. Be the mother/father you know you can be despite all the negative feelings you have. Remember, you chose this partner at some point in your life, and there must have been something about him/her that you liked back then. Try to remember what that was and begin to build new boundaries so that you all can move forward in a healthier manner. 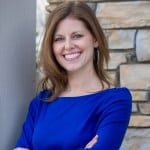 Dr. Lisa Herman is the founder of Synergy eTherapy and licensed psychologist. Contact Dr. Herman today for your FREE consultation by clicking HERE.